E-mail messages contain numerous metadata fields that are utilized by computer forensic examiners as well as legal teams. One key MAPI property that is frequently extracted by computer forensics and e-Discovery software, but yet usually overlooked or underutilized, is e-mail conversation index (PR_CONVERSATION_INDEX).

The e-mail conversation index property indicates the relative position of a message within a conversation thread and is typically populated by the e-mail client for each outgoing message. Information extracted from the PR_CONVERSATION_INDEX property can help answer key questions such as:

Microsoft has an article titled Tracking Conversations on how the e-mail conversation index (PR_CONVERSATION_INDEX) value is calculated. According to the article (quoted directly from their website):

However, our experience differs from Microsoft’s documentation in three areas:

Further research on the discrepancies above revealed that Joachim Metz of Hoffmann Investigations noted the same issues as #1 and #3 above in his article titled “E-mail and appointment falsification analysis”.

Let’s take a look at an example and try to make sense of the e-mail conversation index (PR_CONVERSATION_INDEX) value.

Based on the Microsoft documentation, the e-mail conversation index is divided as follows:

The following 5 bytes, 0000CCBA30, contain the data for the first child block. When we convert 0x0000CCBA30 to binary, we find the following 40-bit value:

According to Microsoft’s documentation, the bits are divided as follows:

Since the first bit is 0, we assume that the high 15 bits and the low 18 bits were discarded when the time difference value was being calculated. Once the discarded digits are added, the FILETIME value becomes the following 64-bit binary string:

Same calculations on Child Block 2 indicate that the time difference for this message is 1 minute and 55.868 seconds and the random number and sequence count values are 6 and 0 respectively.

The final results are as follows:

We realize that performing these calculations on multiple messages can be quite tedious. We have created a free utility called Conversation Index Parser which extracts the information from the PR_CONVERSATION_INDEX value. If you would like to download a copy, please leave us your e-mail address below and we will get back to you with the download link. 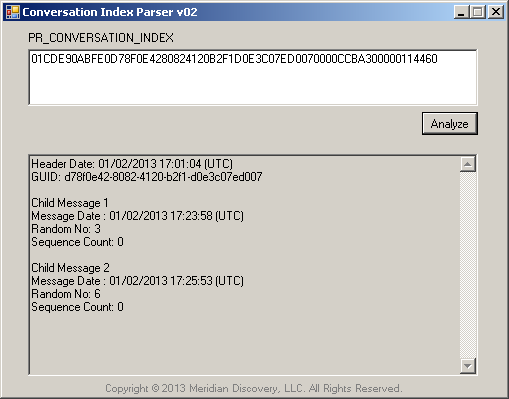 We have made the following observations while analyzing the conversation index (PR_CONVERSATION_INDEX) properties of numerous e-mails:

Combined with additional evidence from the e-mail server or internal e-mail metadata, the information contained in the e-mail conversation index (PR_CONVERSATION_INDEX) MAPI property can be very helpful in the forensic analysis of e-mails. We believe that forensic examiners would benefit from understanding how and when this property is populated and which factors (such as the accuracy of the local computer time) affect the reliability of this information.