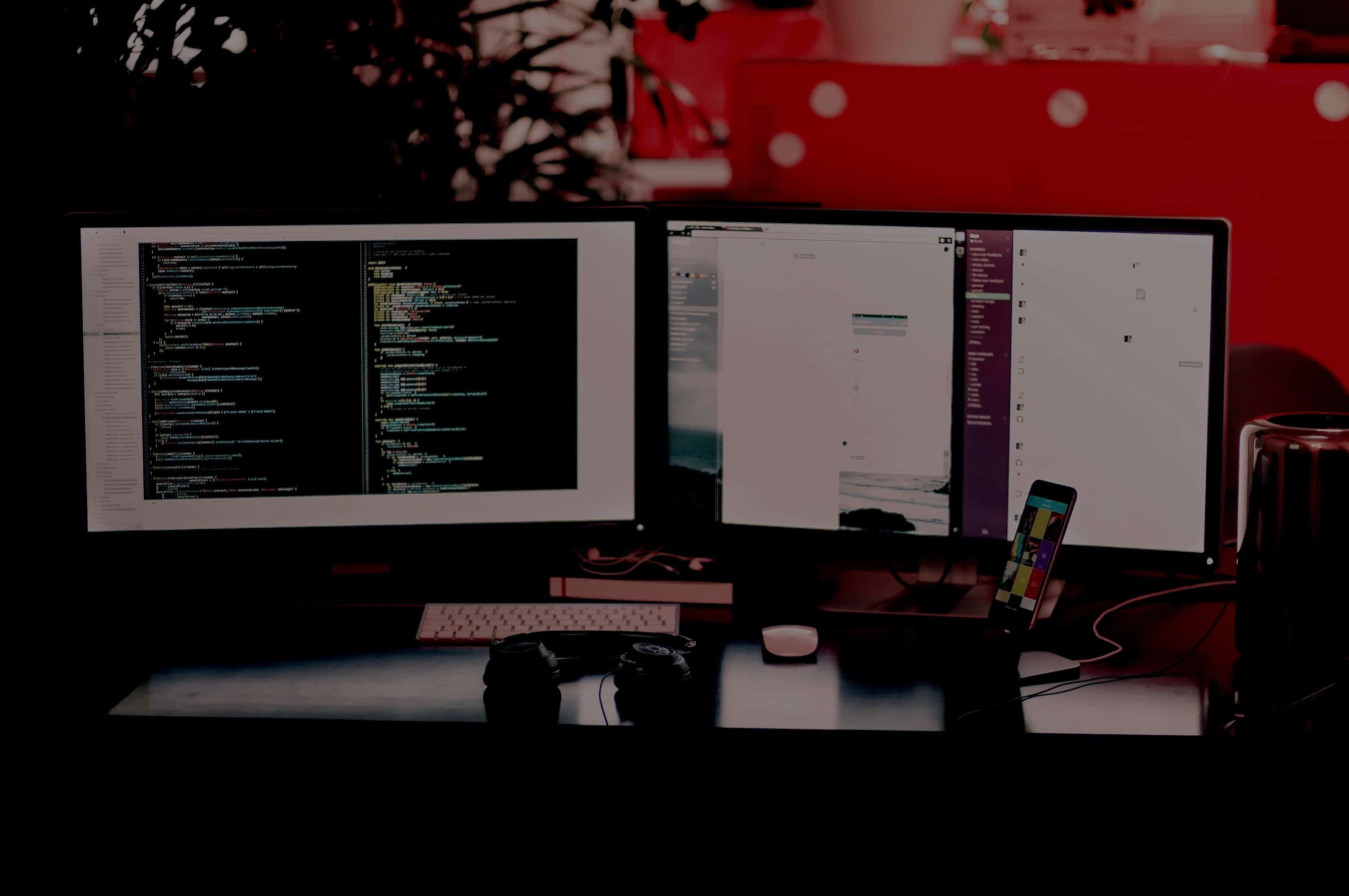 By Arman GungorSeptember 12, 2018Articles
No Comments

Microsoft Word forensic analysis is something we do quite often for document authentication. Because of the great popularity of Microsoft Office, many important business documents such as contracts and memoranda are created using Word. When things go south, some of these documents become key evidence and subject to forensic authentication.

My goal in this article is to review a sample Word document in Word Binary File Format, take a look at the underlying data in Compound File Binary (CFB) file format and see what we can find out beyond what mainstream tools show us.

I chose a sample in Word Binary Format (i.e., .doc) rather than in Word Extensions to the Office Open XML File Format (i.e., .docx) because many other file types in the Microsoft universe, such as MSG files, are also based on the CFB file format. I consider CFB to be a treasure trove of forensic artifacts.

Our target Word document is a document created on 8/30/2018 8:19 PM (PDT) using Word 2007 on a computer running Windows 7 SP-1. It was saved as a DOC file by using the “Word 97-2003 Document” option in the file save dialog in Word. While installing Office 2007, the suspect had chosen “Chris Doe” and “CD” as his “User name” and “Initials” respectively. These preferences are shown in Word options as follows:

Manipulation by The Suspect

It is important to the suspect that this Word document appears to have been created in February 2007. He is somewhat tech-savvy and identifies the FILETIME structures in the Summary Information stream of the document. The creation date (GKPIDSI_CREATE_DTM), last save date (GKPIDSI_LASTSAVE_DTM), and last printed date (GKPIDSI_LASTPRINTED) timestamps look as follows:

The suspect uses an online date converter and converts the date February 8, 2007 16:15:19 UTC to FILETIME format and arrives at the value “80456D539C4BC701”. He makes a working copy of the file using Windows Explorer, and then replaces the bytes above for the creation timestamp with his new FILETIME value.

The suspect checks the internal metadata of the Word document using freely available tools such as olefile and ExifTool and sees that the creation date internal timestamp is reported as he expected. The following is the output by olefile (emphasis added):

The suspect then fires up Word to see if his edits are recognized by Word as he intended. Word shows the properties of the file as follows: 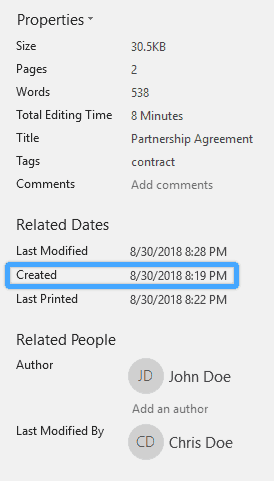 He also notices a discrepancy between how Word counts the number of words in the document (538), and how ExifTool and olefile count them (539). He is not too concerned about this from a Word forensic authentication perspective.

Perplexed by the mysterious creation date, the suspect goes back to the drawing board, does more research and learns that Word documents also contain a Dop structure, which stores their creation (dttmCreated), last modification (dttmRevised), and last print (dttmLastPrint) dates as DTTM structures.

The DTTM structure is quite different than a FILETIME structure. It looks as follows:

* Day of the week is an unsigned integer starting with Sunday (0x0) and ending with Saturday (0x6).

The suspect finally finds the DTTM structure that represents the creation date of the document (dttmCreated). It looks as follows:

He then converts his desired creation date (Thursday, February 8, 2007 08:15 AM (UTC -8)) to DTTM as follows (note that the DTTM structure does not contain any data for seconds, nor does it contain time zone information):

This results in a DTTM value of 0F42 B286. Once the byte sequence is replaced, Word shows the internal creation timestamp as follows: 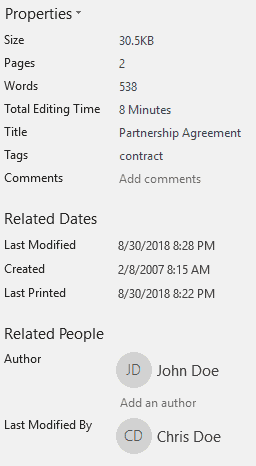 Pleased with his accomplishment, the suspect emails the manipulated document and calls it a “native ESI production”. This way, he thinks, he won’t have to worry about inconsistencies in the file system timestamps. Although, with some more effort, he is confident that he could doctor them, too.

Forensic Authentication of the Word Document

The forensic examiner receives a copy of the email containing the manipulated Word document for forensic authentication. The email is in MSG format, exported from the mailbox of the attorney who hired her. This is not ideal, but it is the best available copy she has access to at that moment.

After making a preservation copy, she starts by examining the attachments table in the MSG file. The IAttach interface shows the following MAPI properties for the attachment: 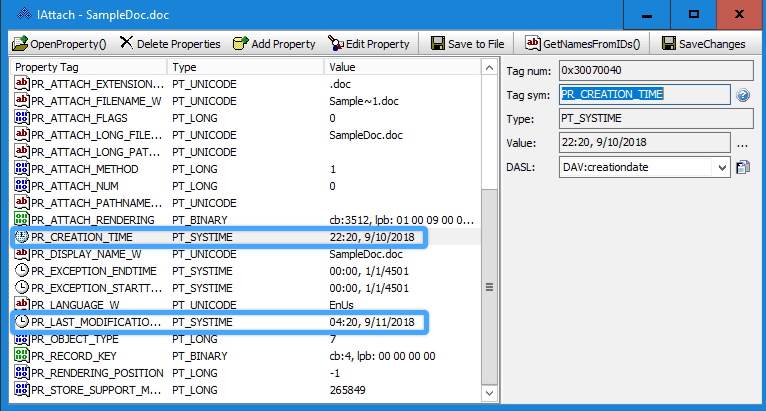 Keeping this in mind, she runs the file through X-Ways 19.5 and extracts internal file metadata to get her examination started. X-Ways shows the following information:

There are a few things here that she finds interesting from a Word forensic authentication perspective:

X-Ways reported an AppVersion value of 12.0. Our forensic examiner wants to manually verify where this value is coming from. The Document Summary Information stream of the Word document contains a property named GKPIDDSI_VERSION. This property specifies the version of the application that wrote the property set storage.

In this case, the value of this property is set to 000C 0000. The 000C 0000 bytes indicate the major and minor version of the application, which is interpreted as 12.0 in the following manner:

Word 12.0 is also known as Word 2007, which was released in late 2006. So, the application version does not pose a problem with the apparent creation date of the document, which is in February 2007.

In addition to the AppVersion, both the Summary Information and the Document Summary Information streams in a Word document contain a 4-byte PropertySetSystemIdentifier structure. The first two bytes of the structure indicate the major and minor versions of the operating system that wrote the property set. The last two bytes represent the OSType. According to the specification, OSType must be 0x0002.

In the screenshot above, you can see the PropertySetSystemIdentifier structure highlighted. The 06 and 01 values indicate the major and minor version of the OS respectively. Windows 6.1 represents Windows 7, which was released to the public in the second half of 2009, which is after the apparent creation date of the Word document.

It is easy to jump to a conclusion here and consider this a red flag. However, the forensic examiner knows that when the Word document is saved, the property sets are re-written and the AppVersion and OsVersion values are updated to reflect the application and OS that were used during the last save. Since the Word document was last modified in 2018, it is possible that Windows 7 was used in a subsequent save, but not necessarily when the document was initially created.

Resolution of The Timestamps in The Summary Information Stream

When the forensic examiner looks at the internal timestamps found in the Summary Information stream of the document, she sees the following:

The timestamps are as follows:

The computer forensics expert notes that the creation timestamp found in the Summary Information stream of the Word document has inconsistent precision compared to the other timestamps. This could be because the timestamp was altered outside of Word.

The forensic examiner had limited information to work off of in this case. She had to look at the Word document in isolation and attempted to find if there were any inconsistencies. A summary of her key findings is as follows:

First of all, some of the readers might be thinking that this is not the most efficient way to backdate a Word document. It requires quite a bit of technical knowledge and leaves a lot of room for error. You are right! My goal was to highlight certain data structures that may be valuable to fellow digital forensic examiners—not to help the bad guys get more proficient in document forgery.

It is important to note that the mainstream digital forensics tools that I tested (i.e., X-Ways v19.5 and FTK v6.4, as well as freely available, general-purpose tools such as olefile and ExifTool) did not parse the DTTM structures in the Dop. So, when there was a discrepancy between the dates found in the Summary Information stream of the Word document and those in the Dop, I was able to observe the discrepancy only in Word, and by manual examination. It pays to check the Dop against the Summary Information stream if manipulation of the document is suspected.

The various FILETIME structures used throughout the CFB file format have different resolutions by design. For example, the creation, last modification and last print timestamps in the Summary Information stream of the document have minute precision; the edit time value (GKPIDSI_EDITTIME) found in the Summary Information stream of the document represents a duration in hundreds of nanoseconds rather than a full date; and the modification timestamp of the root entry has millisecond precision. It is important to be familiar with the resolution of each timestamp for word forensic authentication.

AppVersion and OSVersion are data points that can be helpful in identifying discrepancies in a Word document. For example, if the OSVersion points to Windows 10, but none of the timestamps in the document are after 2013, you might want to take a closer look at that document.

Finally, if you perform Word forensic authentication, I strongly recommend that you get familiar with the Microsoft specifications listed below as references. You will see that the CFB file format contains a ton of interesting information which could be valuable in your next investigation. You can also manually verify values parsed by your forensic tools, and find evidence that’s beyond what mainstream tools are able to report.

For example, comparing the outputs of X-Ways v19.5 and FTK v6.4, I found that FTK did not report the AppVersion or the root entry modification date, and reported the OSVersion of the Word document as 6.1.2, which is not entirely correct as the “2” at the end refers to the OSType, not version. Such interpretation issues can quickly be cleared up if you are able to write a quick script, or fire up your hex editor and take a look for yourself.